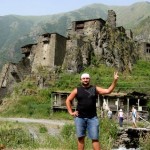 While in Tbilisi, I planned a weekend trip to the mountains. Frankly, mountains - it's my weakness. Love the mountains - high, rocky, green, with snow-capped peaks. Majestic views that do not want to pass the camera.

This time I was sent to Khevsureti. The tour was scheduled for two days, with an overnight stay in tents. Our final destination was the village of Shatili. On the way we saw several old buildings, but the biggest attraction is of course the nature of the region.

Khevsureti - mountainous region in northeast Georgia on the border with Chechnya.

The region inhabited by little, in the 1950s Khevsurs forcibly resettled in the plains, leaving many high-deserted village, and some can accommodate 2-3 people.

Shatili - located deep in the mountains, sparsely populated, and there is not so easy to get to, there is almost no transport. The road - about 120 kilometers mountain primer serpentines, crossing the river path. On the way to one end goes almost 4 hours of time. So if you decided to go, then a tour or on your own car. By foot or with equipment.

rst stop - it Khevsurian village Korsch. This is the last place where catching mobile phone, and which can be reached by public transport. The village has a small ethnographic museum, organized by the villagers, there are collected vintage household items from their families. 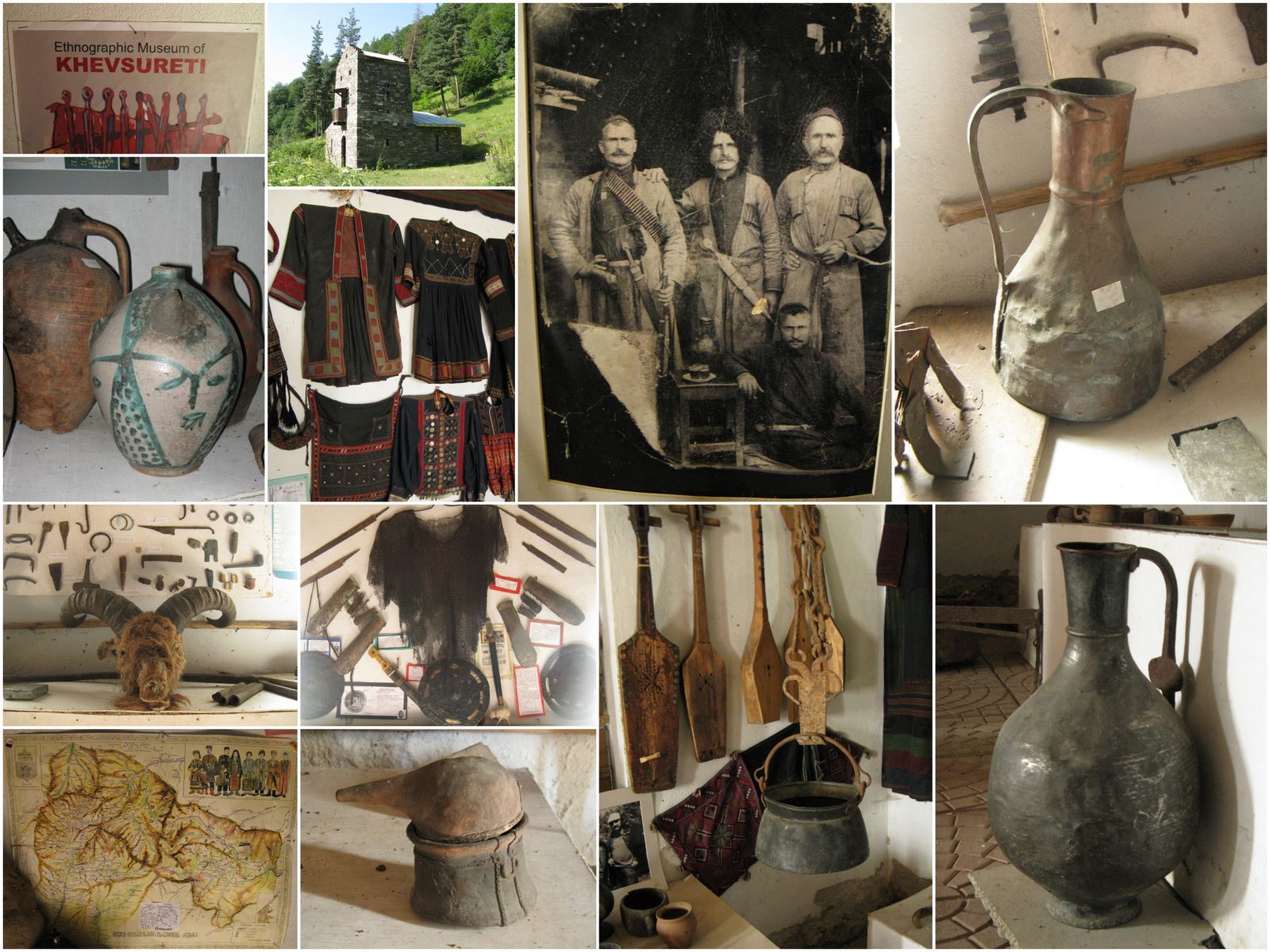 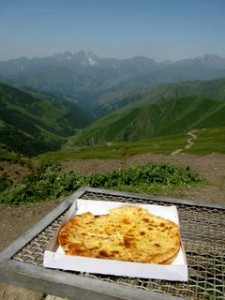 The second stop on the pass Datvidzhvari whose height - 2676m. It offers a breathtaking view of the valley Hevsursogo Aragvi and Argun.

The pass is open only from June to October, the rest of the time it is tightly closed by snow and daredevils risk to go on foot in winter. On mountain roads, many die from avalanches, rockfalls, landslides and banal accident.

The local custom is that necessarily followed by all travelers - at the pass have to stop and remember all those who died on that road. And we commemorated by drinking 50 grams of Chachi and eating khachapuri.

Descending from the pass, we see standing alone tower and the ruins of an abandoned village. This Lebaiskari. Such towers are fairly typical for the area, across the eastern Caucasus, there are the same in varying degrees of preservation. Tower Lebaiskari best preserved in Khevsureti.

Interestingly, the building is not used for the fastening solution, and the stones tightly lapped to each other during construction.

Pass a waterfall, water flows directly into the road, but thanks to the rocky soil does not have dirt. Water is the freshest, great chance to freshen up and take a shower. 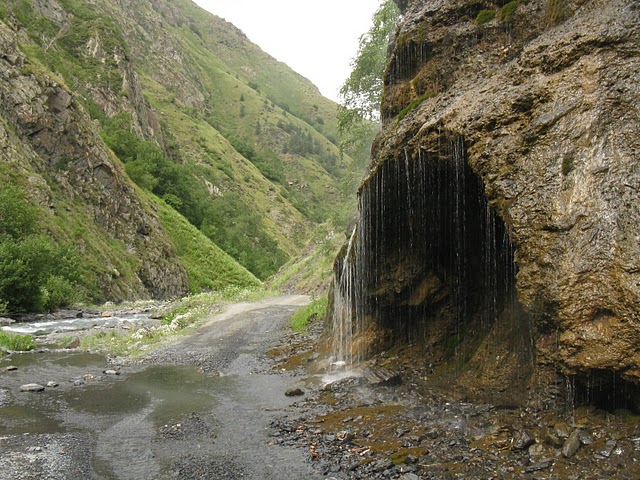 To the place to say that the number of springs and streams, crossed the road, simply unquantifiable. 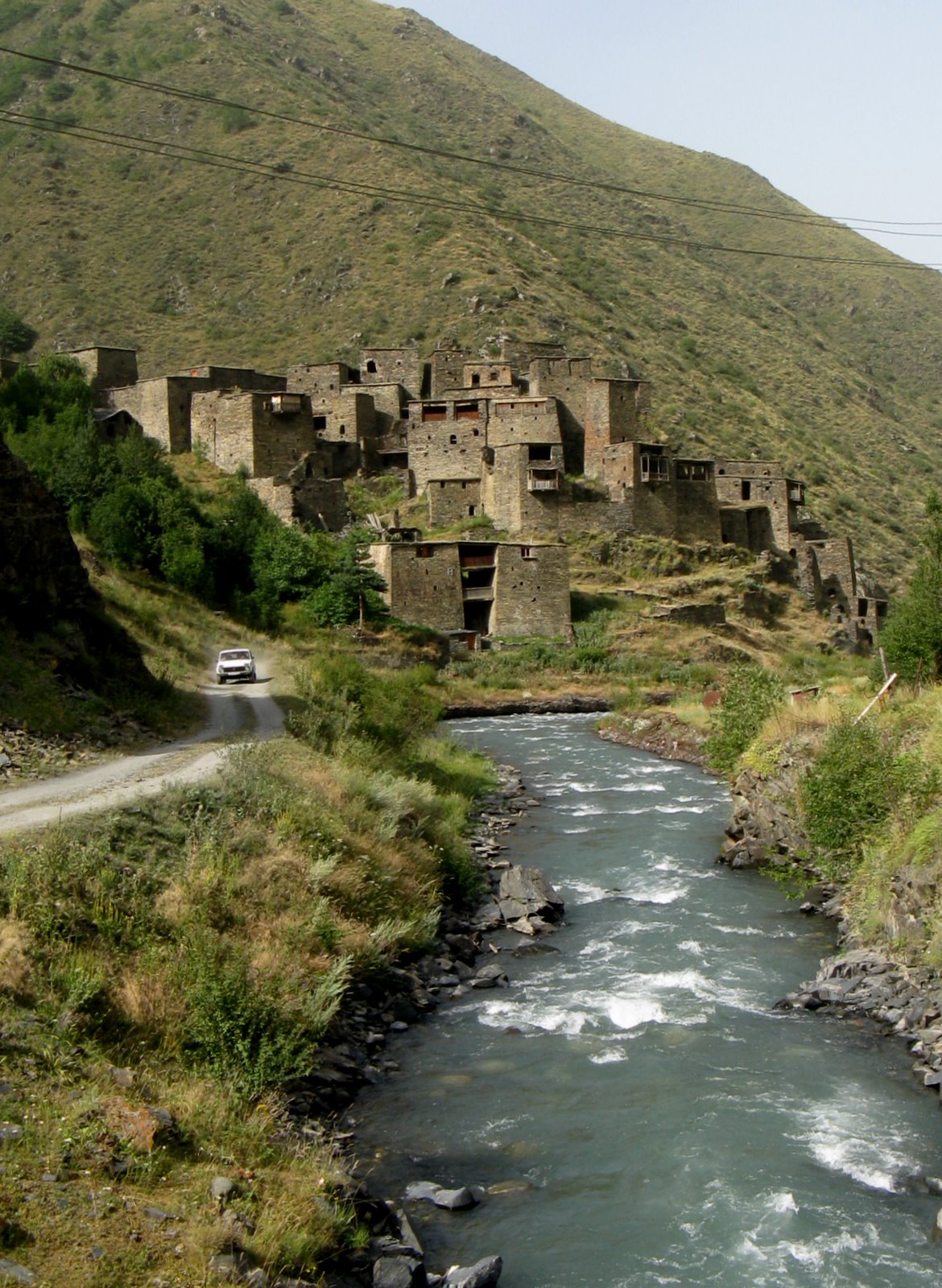 Shatili (შატილი) - Khevsurian village, famous for its fortification architecture. And in this case we see not separate towers, but something complex, in fact the whole fortress, with a non-trivial structure.

As a rule, all the mountain villages of Georgia had a certain capacity, but the largest built in border areas. In this case, the village is located on the border with Chechnya, so there was serious. So he turned the front to the north.

Today Shatili turned into an open air museum. Residents have built modern cottages near the village. Some of the towers are constructed Shatili guesthouses where you can stay overnight.

As promised by the organizers, our group put in tents. We stopped for the night at the beautiful meadow in the valley, right on the beach.

Dividing responsibilities properly, someone doing dinner, someone gathering firewood, camp organized was quickly. Only the problem was to setup tents on  the ground strewn with stones.

This was followed by a welcome dinner in a very international team with traditional Georgian shashlik and red wine.

The weather was perfect, the night was warm and I slept outside. I love to camp out by the fire. Despide water in the creek was cold I did not get out for all day long,  very refreshing.

On the second day we continued along the road towards Chechnya. The next attraction - a fortress Kacha. 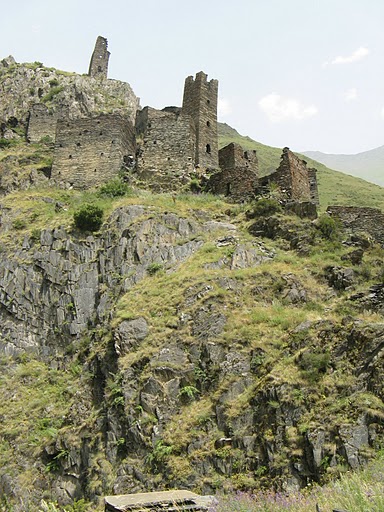 Rises above the road, where Argun gorge becomes narrower, before opening the gaze of travelers Shatili.

Legend has it that when we were besieged defenders and they ran out of water. They go down the river at night in a big ball of wool and squeezed it and drank the water. 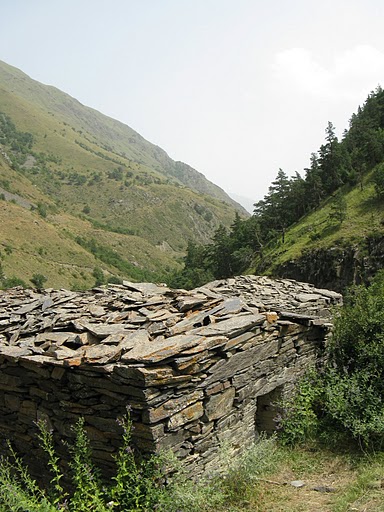 If you look inside the crypt - the real tomb with a set of human remains. Eerie sight.

# Organization of the tour

Started this funny story. Approaching the weekend, the idea of spending two days in the city I did not like, we must act. Searching for an Internet, found a travel agency, a call and I was promised tour Kazbegi, two days, with an overnight stay - I was happy. Closer to the weekend tour changed the appointment to Racha, as promised in the mountains, too, is also interesting, was all said that I was going to Racha. And then on Friday at 22:00 a new phone call fate decided otherwise and we went to Khevsureti 😃

Shoutout to our guides and Malhatu Mamuka, thanks for a good time and good organization of the tour. The tour was organized www.sunnytour.ge

All Khevsureti photos are here